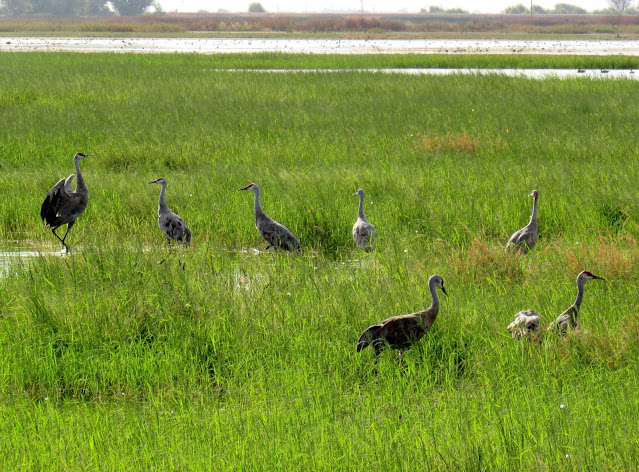 Fall evenings are fine times to wile away the encroaching hours of darkness by perusing works of great naturalists and conservationists, such as Aldo Leopold.  Tucked at the back of his well-known book,  A Sand County Almanac , are two of Leopold's short essays, The Land Ethic and Marshland Elegy .  Though written over 70 years ago about the marshes of Wisconsin, where Sandhill Cranes breed, Marshland Elegy could just as easily have been written about their winter home in the wetlands and farmlands of California's Great Central Valley. Leopold begins his Elegy with the poetic prose for which he is so beloved, painting the kind of word pictures I love to get lost in. "A dawn wind stirs on the great marsh.  With almost imperceptible slowness it rolls a bank of fog across the wide morass.  Like the white ghost of a glacier the mists advance, riding over phalanxes of tamarack, sliding across bogmeadows heavy with dew.  A single silence hangs from horizon to horizon...
Post a Comment
Read more

The Mountains are Calling: Mount Rainier 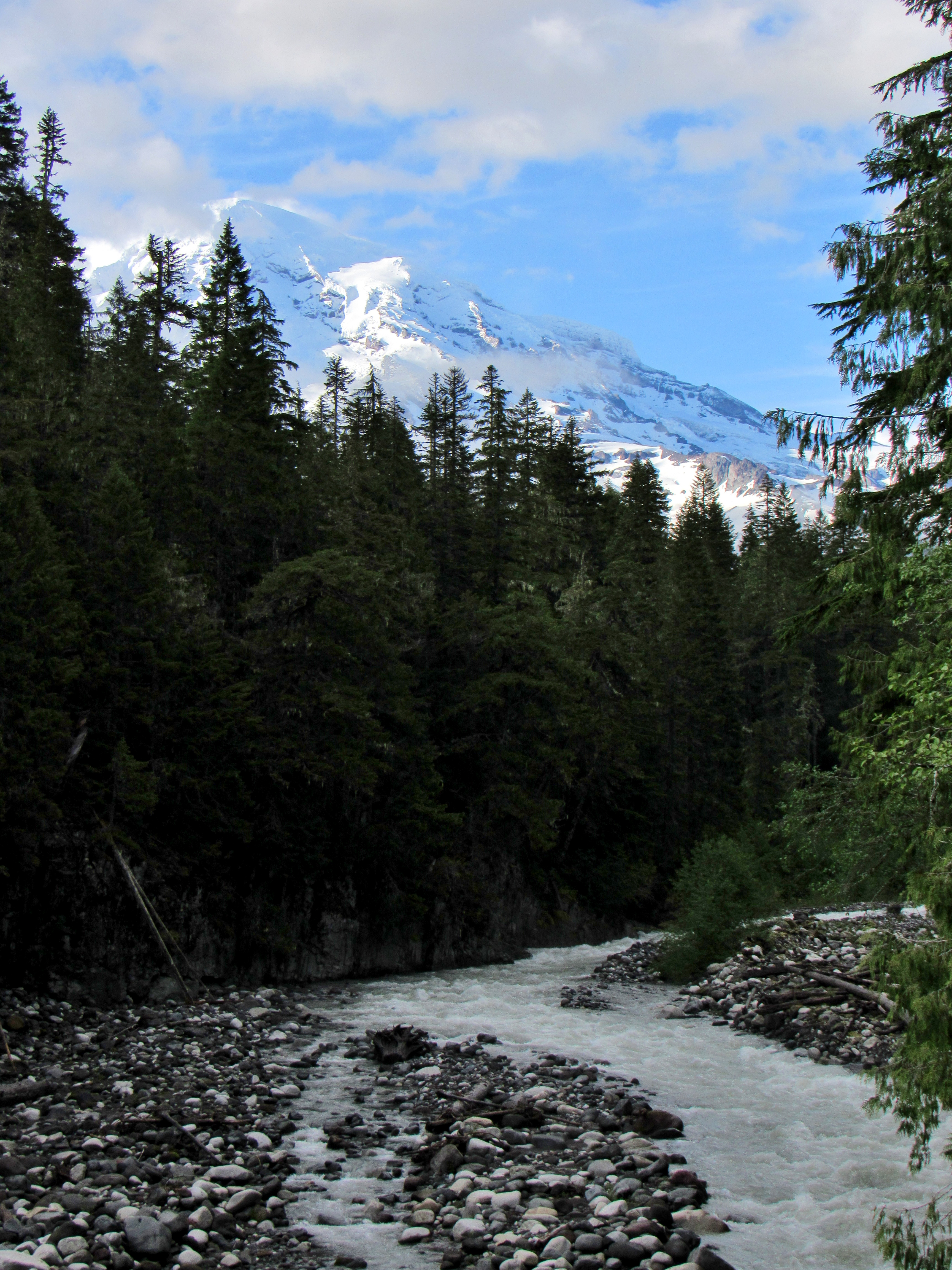 Next stop on our summer roadtrip through the Pacific Northwest: Mount Rainier National Park! (Catch up on our summer travels by following these links to each destination:  Oregon Coast ,  Washington Coast ,  Olympic National Park ,  North Cascades National Park .) Way back in June, we spent a couple of nights camping in Mount Rainier National Park.  The perks of visiting the park early in the season were very light crowds, quiet trails, and the opportunity to catch birds early in their breeding season.  The pitfalls of visiting at this time, however, were significant: deep snow made hiking the iconic high-elevation trails around the mountain impossible, the wildflowers were not yet blooming, and... it rained.  A lot.   But we still thoroughly enjoyed ourselves, as we hiked in the atmospheric forests and explored crashing waterfalls at lower elevations.  The mountain emerged from the clouds for a period of time each day that we were there, and the birds were abundant: what more could we
Post a Comment
Read more

The Mountains are Calling: North Cascades 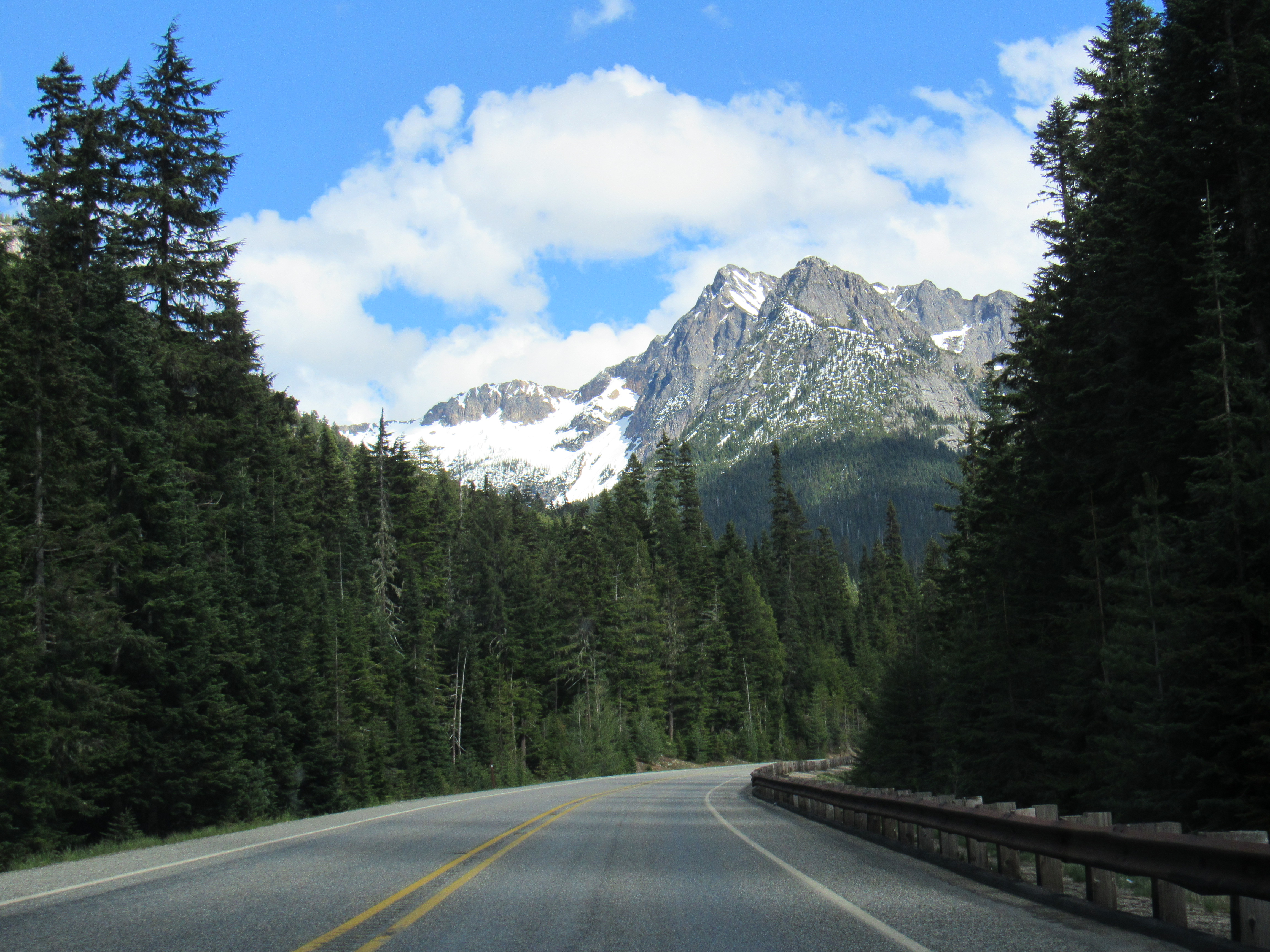 For even more staggering mountain beauty, we made our way northeast from Olympic National Park , to North Cascades National Park, via idyllic Whidbey Island and the Skagit River Valley.   Way back in June, we spent 3 nights camping (and birding) in the North Cascades: here is just a small peek at what we found along the way! The most common birds we encountered were American Robins, Western Tanagers, Pacific Wrens, Hammond's Flycatchers, White-crowned Sparrows, Hairy Woodpeckers, Red-breasted Sapsuckers, Violet-green Swallows, and Swainson's, Varied and Hermit Thrushes.   Probably the best bird photo from the entire trip: an ordinary White-crowned Sparrow! We also heard warblers galore - Black-throated Gray, Wilson's, MacGillivray's, Townsend's, Yellow, Yellow-rumped - and a handful of Red-eyed Vireos, which we never did actually see, hidden as they were high in the treetops.   A colorful Western Tanager Warbling Vireos and Lazuli Buntings sang from Riparian areas,
Post a Comment
Read more 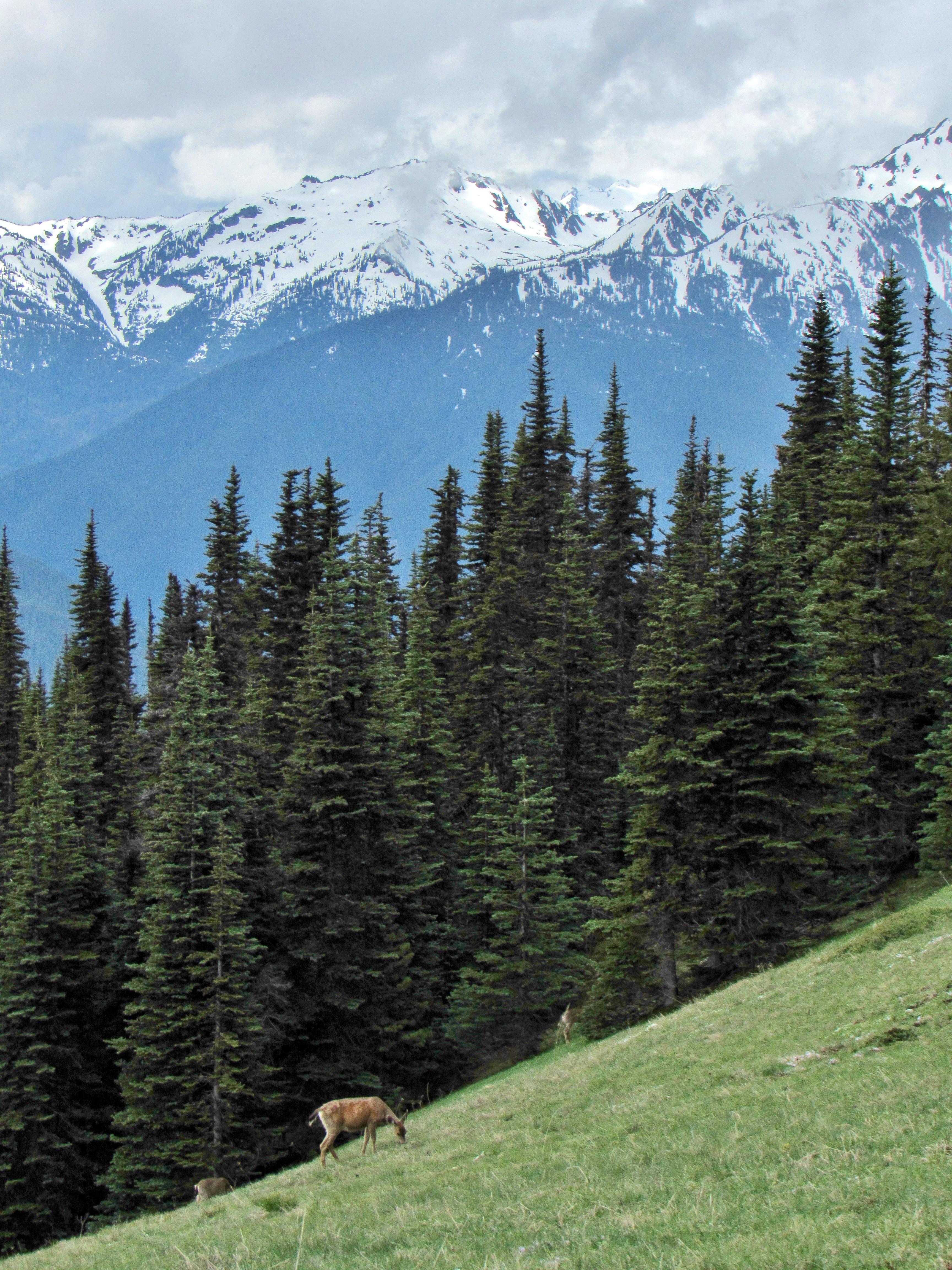 At last: We have reached the Mountains!   (Okay, way back in June we reached the mountains... I'm a little behind in my writing.) My home is in the lowlands, but the mountains will forever call my name.  (Literally, for those of you who know me...)  While the Sierra Nevada are my mountains, I feel a particular affinity to all of our western mountain ranges, including the magnificent Cascades of Oregon and Washington. In this fourth installment of posts covering our summer travels in the Pacific Northwest, we will explore the mountains and forests of Olympic National Park. It might be disloyal of me to say, but it is quite possible that my favorite National Park (of the 30 I have visited) is Washington's Olympic National Park.  From snow-capped mountains, to vibrant green temperate rainforests, to rugged, wave-sculpted coastline, this park has it all!  Here, you don't have to agonize over the mountains vs. beach debate: you can have both!  And, in my opinion, first-rate ex
1 comment
Read more 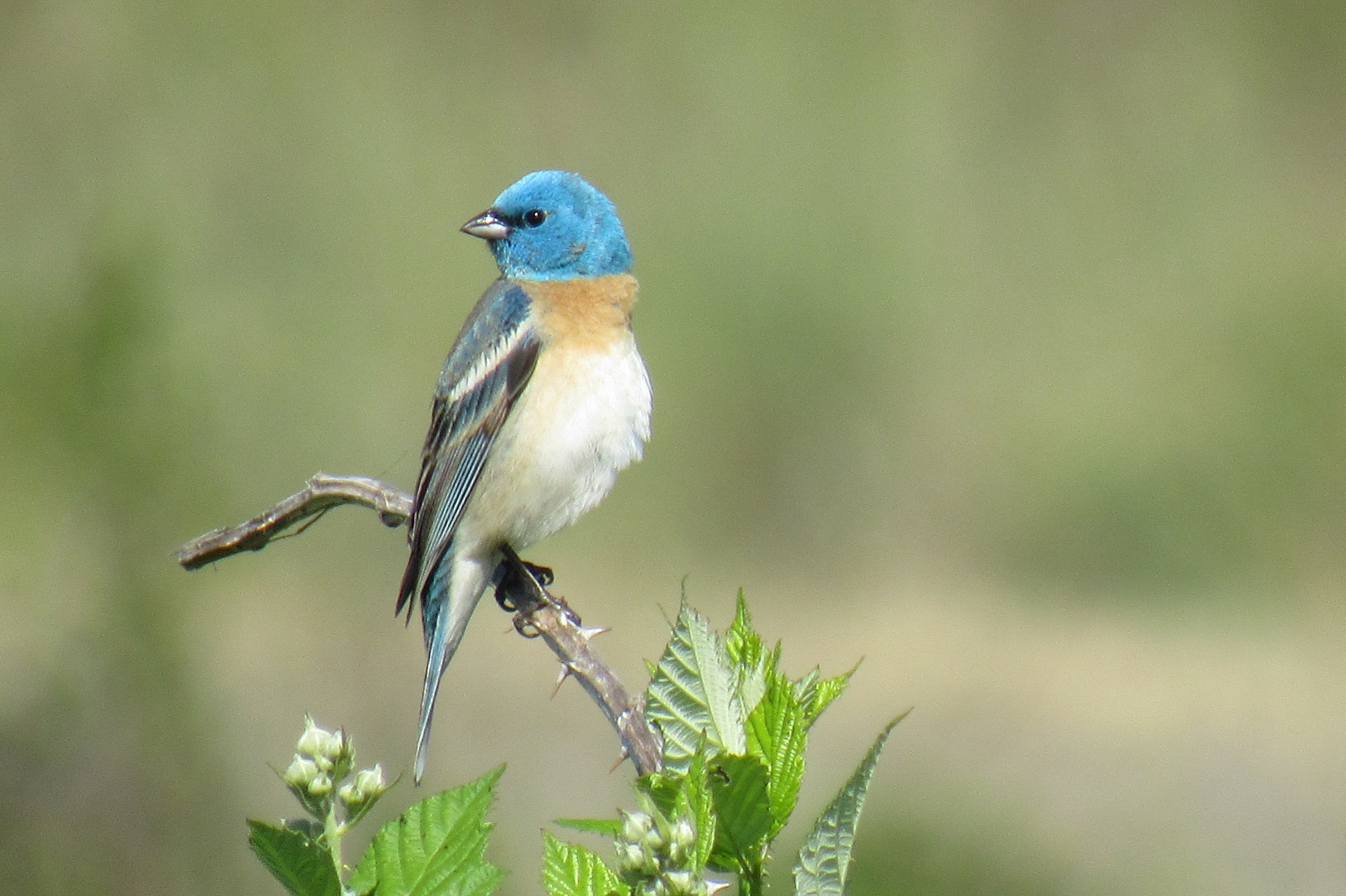 In Part III of our Pacific Northwest adventure, we'll explore the lush, green lowlands between the rugged coast of the Pacific Northwest and the mighty, snow-clad Cascades.   From prairies and wetlands to riparian and coniferous forests, the Pacific Northwest staggers the mind with its endless kaleidoscope of shades of living green!  Is there anything more lovely than the sun filtering through a lime green leafy canopy of delicate vine maples?  Or a meadow of grasses and daisies shining brightly in a forest clearing?  Or fog-drenched forests clothed in mosses and carpeted with ferns?  I think not!  Male Lazuli Bunting at William L. Finley NWR Traveling from place to place in a state of awe, we visited the Willamette Valley's William L. Finley National Wildlife Refuge , near Corvallis, Oregon; northern Washington's gorgeous Skagit River Valley ; and the estuary of the Nisqually River at the Nisqually National Wildlife Refuge , near Tacoma, Washington.  We also spent time in
Post a Comment
Read more 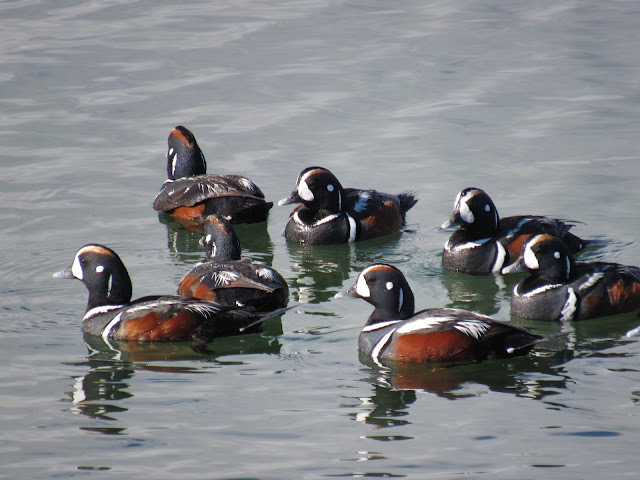 Brooding seas, turquoise waves, dark spruces, raindrops on maple leaves, dripping ferns, and incredible ancient rainforests filled with more birds and unique shades of green than even seem possible...   Welcome to the Pacific Northwest!   Join us for the second part in a series on our recent adventures in Oregon and Washington! After our puffin triumph at Cannon Beach , we headed north up the coast to the mouth of the Columbia River to explore the region made famous by the Lewis and Clark expedition of 1804-06.  For birds, nature and hiking (as well as history), I recommend visiting Fort Clatsop and Fort Stevens, south of the Columbia River, and Cape Disappointment on the north side.  (The Lewis and Clark interpretive center at Cape Disappointment is excellent - and a great place to take refuge on a stormy morning.)   Common Loon At Fort Stevens, we watched the river mouth for a while (during intermittent showers).  While Pelagic Cormorants were the most abundant species nesting at Hay
Post a Comment
Read more
More posts

Named after the Sierra Nevada Mountains, I am a naturalist based in Central California. First and foremost, I am a follower of Jesus Christ and in love with our awesome Creator God: His amazing creation is an unending source of awe and inspiration, and I hope to inspire others to appreciate, respect and protect the beautiful earth we share. I invite you to come along with me as I explore the nature of California and beyond!
- Siera Nystrom - 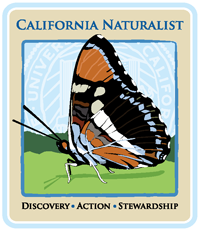